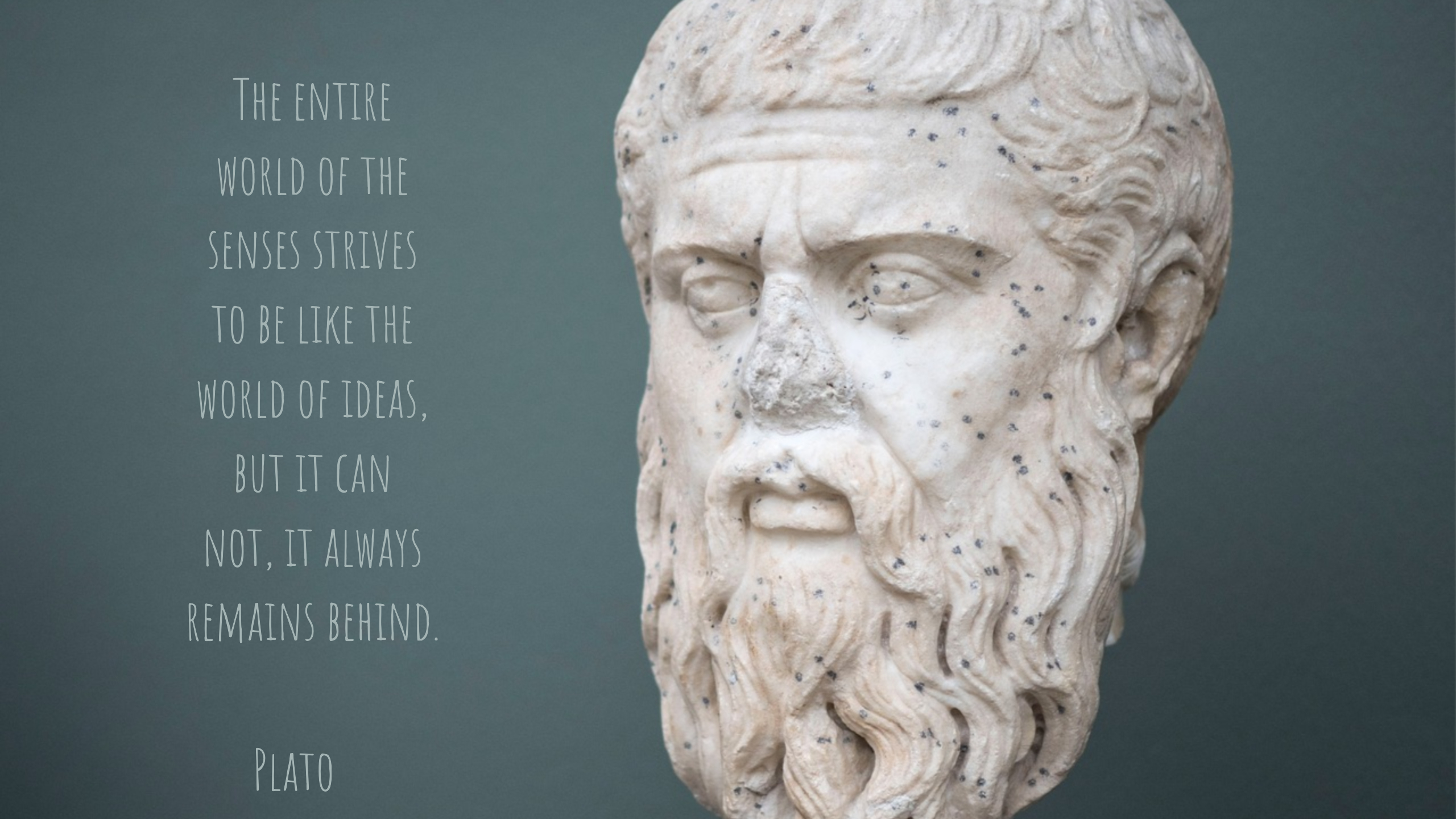 The student of Socrates and teacher of Aristotle is one of the greatest Greek philosophers. But allowing him to become a main theologian was a huge mistake. It’s the cause of many problems and soon it could even end in death.

My first approaches to girls happened during my later teenage phase, around the same time that I became a Christian. While diligently drinking “brotherhood” at school parties as often as possible – a propbably German custom that ends with smacking kisses -, I heard a lot of “platonic” love in Christian youth groups. I came from a simple family and did not have much left for foreign words, but I understood that girls at school were looking for affectionate body contact but not much else, while Christian girls took the the concept of love pretty seriously yet always kept chaste distances. No smacks here. Obviously that was called “Platonic”.

Perhaps it would have been more beneficial to speak of Agape, Philia, and Eros, the three Greek love terms of the New Testament: divine love, brotherly love, bodily love. One could have explained their mystical interaction and equality. That would have been great! Instead, I learned about Platonic love. Today I understand why my former youth leaders struggled so agonizingly with explaining the disembodied, “platonic” love on one hand and physical love on the other as equally good and positive: It simply was not possible. The sensual enjoyment of love was always surrounded by that odd displeasing aura, however hard they even tried. Today, I know why. How could they ever succeed? After all, body and mind were seen as two puzzle pieces that do not quite fit together in Western theology. However, it was not God, the inventor of the human being, who defined this separation. It was nobody less than Plato who shaped our theology on that one. As long as he keeps power over our thinking, body and spirit will never entirely match, no matter how we turn and swivel them.

I guess, less Platon and more Old Testament would have been quite helpful to my youth group, including myself.

But the medieval church, while developing its socalled “scholasticism”, found probably a little too much inspiration in Greek philosophy, and a little too little in its main sources of wisdom – Holy Scripture and the Holy Spirit. However, my poor youth group leaders knew next to nothing about Plato and his theological influence. The clever philosopher had disguised himself quite artfully between the lines.

Suddenly it all makes sense. After all, it was Plato who distinguished strictly between a sensual “world of concrete objects” – that is, our embodied and physical reality, and a higher “world of forms” or “ideas” – that is, the bodiless and the spiritual. It was also Plato who regarded the world of form as the real one, high-quality or even perfect, yet hidden. The physical world however is inferior according to Plato. It’s that very concept the Church has integrated into large parts of theology in a Christianized way. That’s a shame. For it tastes like someone has sabotaged the cake dough with a few tablespoons of gasoline.

Suddenly, everything spiritual thing is emphasized and uplifted. Everything earthly, however, is devalued as profane and trivial.

Suddenly celibacy is declared to be the holiest form of life and beautiful things like orgasm become a taboo.

Suddenly, death becomes the “salvation from suffering in this world“, and resurrection is nothing more than a pill sweetener for kids.

Heaven becomes a diffuse mist of clouds and the rapture becomes the long-awaitened final escape from a bad world to strange heavens.

Thanks to Plato our theology has a whole arsenal of synonyms and descriptions for Plato’s worlds of sense and ideas.

But that’s not all. We’re only getting started. Even the gospel, our very core, becomes an immaterial matter for insubstantial souls to be prepared for an intangible heaven. This is not at all in line with the Hebrew idea of a surprisingly carnal faith and a very earthbound hope.

Most important, it fails to reflect our very creator who puts a lot of effort in producing a very material creation. But that’s not all. Then he is birthing himself through one of his creatures into this material world, living as a human being and thereby expressing in outstanding ways how extremely important the salvation of the physical world is to him, redeeming all three dimensions created by him. However, seperating the spiritual and the physicalt corresponds perfectly to our philosophical thinker Plato and his two worlds of sense and ideas.

The consequence of Platonist theology can only be that environment protection must be wrong for Christians, at least inferior, – after all this world will eventuelly pass nonetheless and besides we’re all waiting for a surreal afterworld anyway. Environmental protection is not only lower and secondary, it’s actually a waste of time, because we should be working for the higher Gospel instead. This leads, in part, to the fact that even many Christians (who actually prefer to see themselves as “the good ones”) advocate the ongoing exploitation of resources of our planet. This is summoning unimaginably destructive and brutal forces. The separation between the pious “We Care About the Gospel!” and the not so pious “We Care About Creation!” is a pure phenomenon of Greek philosophy. This separation is not found in the Bible.

The separation between gospel and creation is based on Greek philosophy and is not found in the Bible.

So what shall we do?

I suggest that Christians should start focusing at least 1000% more on the resurrection of the Messiah as the very heart of our theology – a surprisingly physical event, the “firstborn” of New Creation.

I suggest that men and women finally take on their original role in which we were created: Let’s be image bearers of God. As such, we should reflect our Creator. Anyone who observes our actions with and in creation must conclude nothing but “And behold, it is very good.”

I propose to see the salvation of soul, body, and creation* (creation with its very own worship**) as the one great, common gospel that must be preached and lived by us in word and action. For the whole of creation longs for salvation with us, it will be redeemed with us just as it has fallen with us (innocently). Creation therefore stands and falls with the behavior of man, the image of the One Creator. We must take responsibility for our mistakes as well as for the commission to lovingly take care of Creation.

I suggest that pastoral care (soul care) and care for creation in churches and parishes should be taken equally for granted. No Platonic separation should be made in higher or lower quality.

I suggest that today, like Israel over 2000 years ago, we long for the coming of the Messiah. His return will be just as material as his birth was at Christmas.

I propose to reckon with a determined Messiah, who will return to this world just as promised, not a turncoat Messiah who’s reconsidering his course and then turning halfway in the air back to elsewhere, kidnapping us to a rapt transcendent planet B.

In the meantime, I propose to pray ever louder, “Yes, come, Lord Jesus!” – because only then the whole gospel will reveal itself in its enormous size and immense splendor.

Finally, I suggest that we politely thank Plato and then remove him with a friendly kick in the buttocks of our communities.